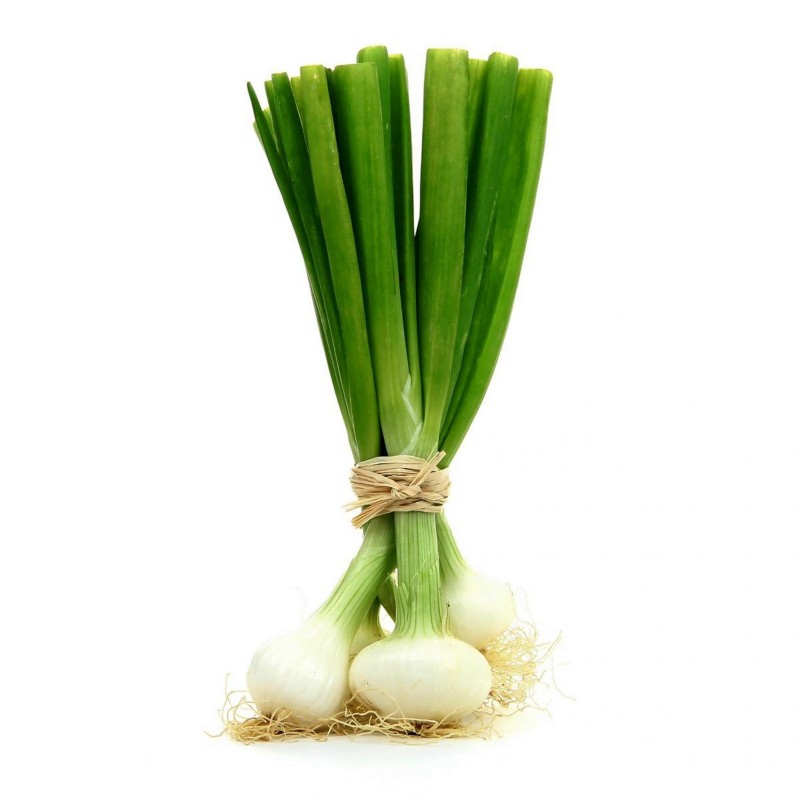 The White Lisbon is an old favorite and ever-popular very quick growing salad spring onion. It is a hardy and reliable variety that features long white stems with bright green tops. It is quick and easy to grow

The White Lisbon is an old favourite and ever-popular very quick growing salad spring onion. It is a hardy and reliable variety which features long white stems with bright green tops. It is quick and easy to grow, cropping in 60 days. Although, traditionally the most popular Spring Onion for successional sowings from March to September, it can also be sown in autumn and overwintered for early spring harvests. They are perfect for container growing and can be tucked into mixed containers or beds

White Lisbon is Indispensable for a decent salad, with silvery skin and crisp, succulent stems that have a mild onion flavour with that characteristic 'bite'. Delicious when young, they take on a more pungent flavour as the bulbs swell. Sow little and often, fortnightly from March onwards, will give a good supply through the summer.

Preparation:
An ideal position would be an open, sunny site with good drainage which has been dug and manured in the previous autumn. Do not plant or sow on the freshly manured bed.
Avoid planting in an area where the previous crop was of the onion family. Many exhibitors grow their show onions in a permanent bed in order to build up fertility, but in the kitchen plot, it is a much better idea to change the site annually.
Onions prefer a neutral to slightly alkaline soil so lime if the soil is acid. Apply a general fertiliser if needed and rake the surface when the soil is reasonably dry. Tread over the area and then rake again to produce a fine, even tilth.

Sow in autumn or sow successionally from late winter to late summer.
In cold areas and for exhibition bulbs sow under glass in January,
Sow thinly 12mm (½in) deep in either narrow or broad drills allowing 15 to 23cm (6 to 9in) between drills. No thinning is necessary.
The seed germinates over a wide range of temperatures and is faster at higher temperatures. Sow every 3 weeks for continuous crops.

60 days
Harvest as required from May to October, later sowings may remain through to December if the weather remains mild. Best when used immediately though they will keep in the fridge for a few days.

Culinary Use:
Spring onions can be used for so much more than just adding to your Peking Duck pancakes. When raw or very lightly cooked they impart a wonderfully vibrant yet mild flavour where normal onions would be overpowering. Make some champ by folding chopped spring onions into creamy mashed potatoes - add some grated cheddar if you like - and marvel at how such a simple dish can taste so fantastic. Or combine with ginger to form the soul of a number of classic Chinese and Japanese dishes.
Trim off the root and about a centimetre from the green tops. The bulb area can be eaten raw or cooked but the tops are best when chopped and added to a dish just before serving.
Store in the fridge for up to four days.

Nutrition:
For years onions have been used as one of the oldest medicines for their anti-bacterial, antiseptic and anti-asthmatic properties. They have also shown to lower blood pressure and cholesterol levels.

Pest Repellent: As
a member of the allium family, they will help to deter most insects, including aphids, mosquitoes, carrot flies and tomato pests. They are also useful in the fight against, moles, mice slugs and weevils!

History:
Eaten and cultivated since prehistoric times, onions were mentioned in the first dynasty of ancient Egypt, circa 3200 BC, and have appeared in tomb paintings, inscriptions and documents from that time on. Some paintings depict onions heaped onto banquet tables, both the robust bulb onions as well as scallions.
The spring onion is believed to have originated in the Far East. Chives and spring onion are recorded in Chinese history from 2000 BC.
They were grown in Ancient Egypt, and eventually arrived in Rome and became known as the word onion from the Latin word Unio , which means 'large pearl'. In Middle English, it became unyon, as time passed the word developed into the onion.

Be the first to write your review !
Treść niedostępna