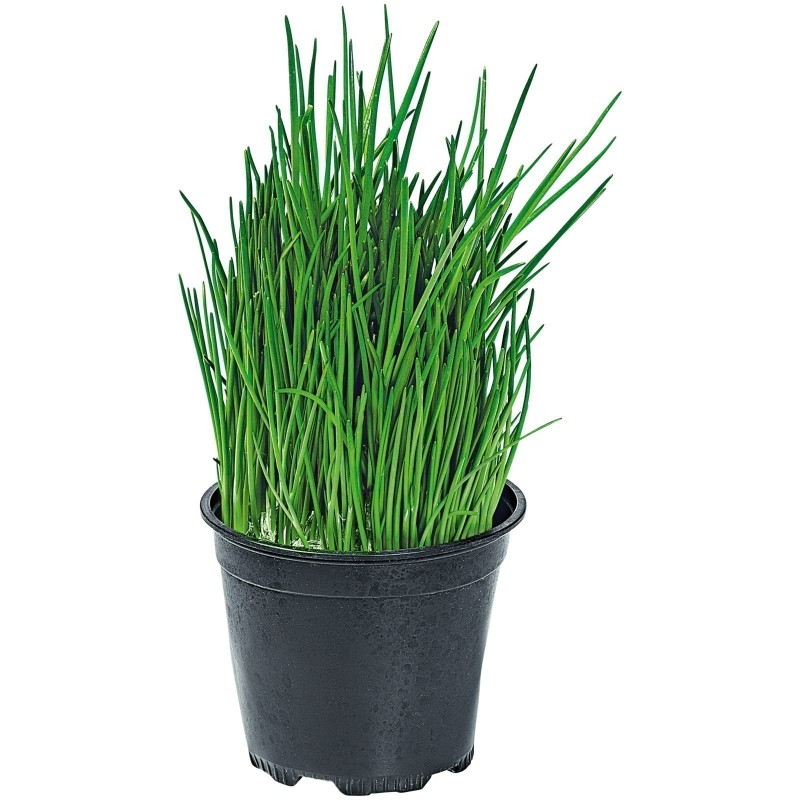 Allium tuberosum (garlic chives, oriental garlic, Asian chives, Chinese chives, Chinese leek[4]) is an Asian species of onion native to the Himalayas (Nepal, Bhutan, India) and to the Chinese Province of Shanxi. It is cultivated in many places and naturalized in scattered locations around the world.

Allium tuberosum is a perennial bulbous plant with a distinctive growth habit with strap-shaped leaves unlike either onion or garlic, and straight thin white-flowering stalks that are much taller than the leaves. The flavor is more like garlic than chives. It grows in slowly expanding perennial clumps, but also readily sprouts from seed. In warmer areas (USDA Zones 8 and warmer), garlic chives may remain green all year round. In cold areas (USDA Zones 7 to 4b), leaves and stalks will completely die back to the ground, and re-sprout from roots or rhizomes in the spring. The elongated bulb is small (about 10 mm diameter), tough and fibrous, originating from the stout rhizome.

Originally described by Johan Peter Rottler, the species name was validly published by Curt Polycarp Joachim Sprengel in 1825.[2] Allium tuberosum is classified within Allium in subgenus Butomissa (Salisb.) N. Friesen, section Butomissa (Salisb.) Kamelin, a very small group consisting of only A. tuberosum and A. ramosum L.,[10][11] which have been variously regarded as either one or two genetic entities.

Originating in the Siberian–Mongolian–North Chinese steppes,[10] but widely cultivated and naturalized. Allium tuberosum is currently reported to be found growing wild in scattered locations in the United States. (Illinois, Michigan, Ohio, Nebraska, Alabama, Iowa, Arkansas, Nebraska and Wisconsin)  However, it is believed to be more widespread in North America because of the availability of seeds and seedlings of this species as an exotic herb and because of its high aggressiveness. This species is also widespread across much of mainland Europe[16] and invasive in other areas of the world.

A late summer to autumnal blooming plant,[4] Allium tuberosum is one of several Allium species known as wild onion and/or wild garlic that in various parts of the world, such as Australia, are listed as noxious weeds[13] or as invasive "serious high impact environmental and / or agricultural weeds that spread rapidly and often create monocultures".

Often grown as an ornamental plant in gardens, several cultivars are available. A. tuberosum is distinctive by blooming later than most native or naturalised species of Allium.[14] It is hardy (USDA) to zones 4–10.

A number of varieties have been developed for either improved leaf (e.g. 'Shiva') or flower stem (e.g. 'Nien Hua') production.[18] While the emphasis in Asia the emphasis has been primarily culinary, in North America the interest has been more as an ornamental.[19] 'Monstrosum' is a giant ornamental cultivar.

Uses have included ornamental plants, including cut and dried flowers, culinary herb, and traditional medicine. Garlic chives have been widely cultivated for centuries for its culinary value. The flat leaves, the stalks, and immature, unopened flower buds are used as a flavouring. Another form is "blanched" by regrowing after cutting undercover to produce white-yellow leaves and a subtler flavor.

In East Asia (as Nira, Japanese 韮, or "green nira grass") and Central Asia (as Djusai) A. tuberosum is used for both garlic and sweet flavours, in soups and salads and traditional Japanese and Chinese dishes. Chinese names for A. tuberosum (韭菜) vary depending on the plant part as well as between Mandarin Chinese and Cantonese, as well as varying romanizations.[12][21] For instance the green leaves are Jiu cai, the flower stem Jiu cai hua and blanched leaves Jiu huang in Mandarin, but Gau tsoi (Kow choi), Gau tsoi fa and Gau wong in Cantonese respectively.[23] Other renderings include cuchay, kucai, kuchay, or kutsay.

The leaves are used as a flavoring in a similar way to chives, scallions or garlic and are included as a stir fry ingredient. In China, they are often used to make dumplings with a combination of egg, shrimp and pork. They are a common ingredient in Chinese jiaozi dumplings and the Japanese and Korean equivalents. Garlic chives are widely used in Korean cuisine, where it is known as buchu ( Korean 부추), most notably in dishes such as buchukimchi (부추김치, garlic chive kimchi), buchujeon (부추전, garlic chive pancakes), or jaecheopguk (a guk, or clear soup, made with garlic chives and Asian clams).[24] A Chinese flatbread similar to the scallion pancake may be made with garlic chives instead of scallions; such a pancake is called a jiucai bing (韭菜饼) or jiucai you bing (韭菜油饼). Garlic chives are also one of the main ingredients used with Yi mein (E-Fu) dishes.[25] In Nepal, cooks fry a curried vegetable dish of potatoes and A. tuberosum known as dunduko sag.[26] In Vietnam, the leaves of garlic chives (Hẹ) are cut up into short pieces and used as the only vegetable in a broth with sliced pork kidneys.[27] In Manipur and other northeastern states of India, it is grown and used as a substitute to garlic and onion in cooking and is known as maroi nakupi.

Seed - sow spring in a cold frame. The seed has a fairly short viability and should not be used when more than 1 year old[206]. Prick out the seedlings into individual pots when they are large enough to handle - if you want to produce clumps more quickly then put three plants in each pot. Plant out in late summer if the plants have developed sufficiently, otherwise plant them out the following spring. Division in early spring. Very easy, the plants divide successfully at almost any time of the year. The divisions can be planted straight out into their permanent positions if required.